Until 1792, the monastery’s most impressive building used to stand in this now empty space. With a nave 106 meters long, the Royaumont abbey church was nearly the size of the Soissons Cathedral. Built between 1228 and 1235, it was dismantled during the French Revolution and its stone blocks repurposed. Today all that remains is a staircase turret, 36 meters high, the wall of the South aisle of the nave, and some traces of its foundations. But this has proved enough to reconstitute the original floor plan, as evidenced by the monumental stones that have been displayed in situ since 1907.

Destroyed during the French Revolution, the church has been digitally reconstructed and can be visited virtually using special stereoscopic viewers set in various spots among the ruins.

The slim turret that still stands away from the other buildings gives visitors an idea of how monumental the church built by Saint Louis must have been.

With vaults close to 28 meters above ground, it was indeed much larger than either the Notre Dame Cathedral in Senlis or the Saint-Maclou Cathedral in Pontoise.

Built on a Latin cross plan, the church had an eight-bayed nave with aisles, a transept and a choir with an apse surrounded by seven radiating chapels. It communicated with the cloister on its South side and with the monks’ cemetery to the North, where a building currently stands that was erected in 1795 using the church’s stone blocks, with a view to accommodating the textile mill’s looms.

The turret from the North branch of the transept also highlights the tripartite elevation of the church, typical of the large gothic churches built in the Ile-de-France around 1230, as well as the quality of the construction work. The few remaining sculpted features, plain and non figurative, are typically Cistercian. And yet, as of 1253, the General Chapter of Cîteaux decried the presence within the sanctuary of paintings, wall hangings, figures and other seraphs, not really consistent with the simplicity advocated by the White Monks… The Benedictine Rule was again bent when four of Louis IX’s children and three other members of the royal family were buried in the church’s choir. This was exceptionally tolerated by the Chapter and bears witness to the king’s attachment to Royaumont.  Removed in August 1791, the recumbent figures of the princes are now in the Saint Denis Basilica, whereas the other statuary is preserved in the Cluny and Louvre museums in Paris.

On the wall of the South branch of the transept, a red stucco drapery fragment signals the former location of the mausoleum sculpted in 1711 by Antoine Coysevox for Henri de Lorraine, comte d’Harcourt. The mausoleum was also taken out before the church was destroyed and transferred to the Saint-Rémy parish church in Asnières-sur-Oise. Since 1959 it has been returned to Royaumont, and can be admired in the monks’ former refectory. 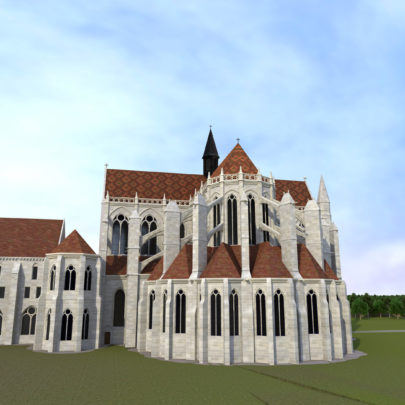 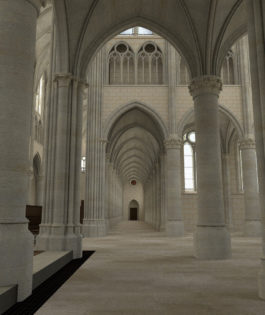 Since 2010, the ruined abbey church has been the object of a “digital restoration”. Under the direction of Patrick Callet, students from the École Centrale de Paris have created a three-dimensional digital model of the church in its medieval state. This undertaking has resulted in a restitution in the form of a film of the interior and exterior of the church in its medieval state: it is displayed on the panels of the digital mediation path.

Concert dans les ruines
Open 365d/year Visit every day
The royaumont.com website uses functional cookies that are strictly necessary, and cookies that collect statistics on website use that you may accept or refuse.
ACCEPT ALLREJECTCookies parameters